A reprint from Op-Med magazine 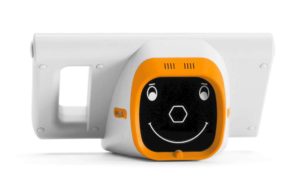 But, as we know, working with kids can be tough. Using picture charts to assess a three year old’s vision is, at times, quite challenging and time consuming. Children vary in their ability to follow directions, cooperate, and focus on the task at hand. In a 2017 study by Modest et al, a survey of 12 practices found only 38.6% of three year olds were screened versus 82.9% of five year olds.

That, of course, is a problem.

There’s a different way to screen children that doesn’t rely as much on the child’s cooperation: photoscreening or instrument-based screening. This method is endorsed by major vision-related academies and has excellent sensitivity and specificity for visual abnormalities.

There are a few different devices on the market. One, by Welch-Allen, is called the SPOT Vision screener. With minimal staff training. the examiner can view the child’s eye through the instrument and determine if a visual abnormality is present. There’s also a smartphone app-based program called GoCheck Kids, where the examiner takes a photo of the child’s eyes and visual abnormalities are detected. Both can be used in infants up to adults. These technologies allow identification of amblyopia years before a parent might suspect a visual abnormality. Photoscreeners can also detect cataracts and retinoblastoma which can indicate life-threatening problems.

This technology is a breakthrough…so why isn’t is being adopted more widely? Insurance coverage varies widely. An office I worked in implemented photoscreening; within the same state’s Medicaid program, some plans covered screening and others did not. A major private insurer wrote a policy specifically denying coverage for photoscreening in primary care, claiming there was not enough evidence of benefit. In response, I wrote a lengthy appeal letter, including peer-reviewed articles and policy statements, But, it was to no avail. Another major private insurer told a parent they would pay for photoscreening if done at the eye specialist but not at the primary care office. So, the insurance company agreed it was worthwhile, but they decided to limit access.

That’s why I have this not-so-crazy idea: photoscreen at well-child checks. Screening in the primary care setting is an easy way to reach far more kids and detect far more children in need of intervention. A limited number of preschool aged children see eye specialists; almost all go to the pediatrician at some point.

But, that leaves the primary care provider with a problem. Do you offer a service that only some insurers pay for? My current organization, at least when it comes to vaccines, follows the principle of equity. Unless you can offer an intervention to all, it isn’t fair to offer it to some. Is vision screening similar?

One option might be to offer it to all but to have patients sign a waiver to agree to pay out-of-pocket if it is not covered. Another option would be to offer the service as an add-on for a set fee. This would work in theory, but it isn’t permissible to charge Medicaid patients. I believe it’s unethical to offer a service to only private-pay patients. An office might “write-off” the cost of screening for those patients whose insurances do not cover the screening. But in practice, this means over-charging patients whose insurances do cover the screening in order to meet expenses.

There is no easy answer. Payment mechanisms make it difficult, but the technology is clearly a clinical advantage. Hopefully, in the future, more insurers will come to realize this.

Heather Finlay-Morreale, MD is a board-certified primary care pediatrician working for Nashaway Pediatrics, a practice run by UMass Memorial in Sterling, Massachusetts. She trained at the University of Cincinnati and the Floating Hospital at Tufts Medical Center. She is interested in mental health care in primary care and social media in medicine. She can be followed at @FinlayMorreale. She is also a 2017–2018 Doximity Fellow.

Link to the original article